Save Print
Pan-Indian Chicken Biryani with Potatoes
Author: Adapted from Cambridge Public Schools
Recipe type: Hot entree. HACCP Process 2, same day service
Cuisine: Biryani (pronounced [berr-ee-ani) spicy rice is a South Asian mixed rice dish with its origins among the Muslims of the Indian subcontinent. Creating your own Biryani spice blend reduces sodium and increases flavor!
Prep time:  80 mins
Cook time:  40 mins
Total time:  2 hours
Serves: 100 6.5 oz
This is a food service recipe for potatoes.
USDA Meal Components: 2 oz meat/meat alternate, ¼ c Starchy Veg, ½ c credible whole grains
Cooking and prep level for this recipe is rated: Intermediate.
Ingredients
Instructions
Notes
The History of Biryani from thebetterindia.com
Though it may appear to be a dish indigenous to India, in reality, the dish originated quite far away. Biryani is derived from the Persian word Birian, which means "fried before cooking" and Birinj, the Persian word for rice. While there are multiple theories about how biryani made its way to India, it is generally accepted that it originated in West Asia.
One legend has it that the Turk-Mongol conqueror, Timur, brought the precursor to the biryani with him when he arrived at the frontiers of India in 1398. Believed to be the war campaign diet of Timur's army, an earthen pot full of rice, spices and whatever meats were available would be buried in a hot pit, before being eventually dug up and served to the warriors.
The evolution of biryani spans many centuries, many cultures, many ingredients and many cooking styles. From an army dish to a dish fit for royalty, the biryani today is a pan-India culinary favorite. Its many varieties reflect the local tastes, traditions and gastronomic histories of their regions of evolution. 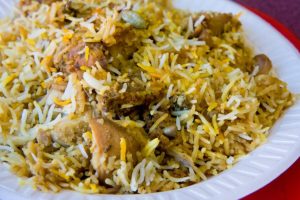