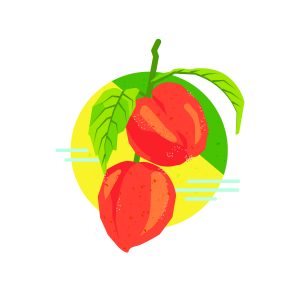 The peach (Prunus persica) is a deciduous tree indigenous to the Northwest region of China between the northern slopes of Kunlun Shan mountains and the Tarim Basin where the peach was not only first cultivated but also domesticated. The peach plant bears an edible succulent fruit known as the peach or a nectarine. Peaches and nectarines might be the same species, but they are commercially considered to be different fruit. Genetically, nectarines are produced from a recessive allele for fuzzy skin whereas peaches are produced due to a dominant allele for fuzzes on the skin, hence the difference.
The world’s largest peach producer is China, followed by Spain, Italy, Greece, and the United States.

Chinese mythology tells of a group of deities celebrating the everlasting life provided by the fruit every six thousand years, in an extravagant ceremony called the Feast of Peaches. The legend, usually referred to as the Peaches of Immortality, explains that the peach trees planted for the occasion would take 1,000 years to sprout leaves, and another 3,000 for the peaches it produced to ripen – talk about delayed gratification!
Even today, the feast remains a popular celebration in China, observed annually on the third day of the third moon month. And all across Asia, the peach is still associated with, if not immortality, then at least vitality, thanks to the beautiful blossoms that appear on their trees before their leaves even start to sprout.

Spread the word and build partnerships

Don’t be a solo act. Invite your community to the table!

Promote in your community:

Invite others onsite to get involved:

August 22 is the National Eat a Peach Day in the United States. This date was chosen because peaches are harvested between June and August.

We have many recipes for you to look through in our Recipe Index! Here you can see take-home recipes for use in the community as well as more choices for your cafeteria. We have hot and cold recipes for most foods. Be sure to use the provided icons on your menu!